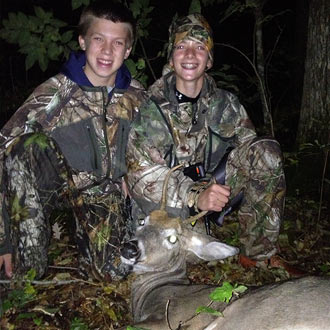 I am fresh off a trip to our neighboring state of Wisconsin where I was fishing bass with Jimmy Bell on Lake Superior.  That just doesn’t sound right does it?  But it is right, we were on Chequamegon Bay near Ashland, WI and absolutely hammered the monster smallmouth bass!  And as exciting as it was, I have even more exciting news!  You will have to tune into that show, because it’s going to be a “laugher”!  I’m not kidding, you will definitely know what I am talking about after this show airs!!

But what’s more exciting than bass you say?  I say deer.  The archery season is open for deer and the other night was one of my all time best nights in the woods.  I was out in the woods with my son Mac and his friend Garrett.  I dropped the two off at their stands and made sure “all was good”.  I then ventured to the east and decided to sit on the ground because I was starting to work up a sweat.  I sat there and swatted mosquitoes for a couple of hours until I got busted by a deer, not sure if I was seen or smelled..maybe both!  Should have had the Thermacell!!  Anyway, I received a text from my son asking if he should start packing up and my immediate response was NO, we still had the best time of day in front of us…the last 15 minutes before sunset.  That 15 minutes was about up and I figured maybe if I headed in the direction of the boys, maybe I would push something their way.  I took about 20 steps and started to hear some commotion.  I stopped, and immediately heard what I thought was antler tines hitting branches as it ran through the woods.  I then spotted the deer, came to full draw and watched it run across the trail 40 yards from me.  I realized immediately it was a small buck and it sure couldn’t have been his rack rattling off the branches (he didn’t have a lot of head gear).  As I saw him bolt down through the woods my phone buzzed and it was the voice of my excited son Mac.  I shot one!!  I told him to hang tight and I would soon be there.  He told me the story, but the bottom line is that he shot at buck at 15 yards and that sound I heard must have been the arrow rapping off the branches as it bolted off.  Mac ran and got Garrett, I looked for blood or any sign of a hit but didn’t see anything.  Once the boys got back to me, we headed off to where I saw it bolt across the trail and it didn’t take us too long before we saw blood.  We were pumped and I’m sure many of you can relate!  For the next 1.5 hours we tracked and we tracked, under the darkness of night.  We eventually got to a point where the drops of blood were becoming so minute that we gave it the 5 minute warning.  We figured if we had to come back in the morning that it would be chewed up and spoiled, so we really didn’t want to go that route, but on the other hand there wasn’t a lot we could do and it was already past bedtime for the little school boys.  Our hope had almost run out when I decided to take a quick walk and scan of the woods with my cell phone flashlight.  Boy was I thankful I did that!  I found Mac’s first deer (ever) and it was a nice 4 point buck!  Wow, was there some happiness at the end of that blood trail!  We thanked the Lord, took some photo’s, gutted it and the work began!

Article written by Walleyedan for the Brainerd Dispatch.